While on location at a house fire in Webster, four (4) West Webster Firefighters were shot. One of the volunteer firefighters shot is a Rochester City Firefighter, FF Joseph Hofstetter, E-2 G-4. At this time, Joe is out of surgery and in guarded condition in the ICU. Our prayers go out to the victims and their families of this very tragic incident in Webster.

Webster, N.Y. -- Two firefighters have died and two others were wounded after being shot at the scene of a fire on Lake Road in Webster early Monday. The fire started around 5:30 a.m. at 191 Lake Rd. near Bay Rd. and when the first responders arrived, a gunman opened fire on them. Webster Police Chief Gerald Pickering said that the suspect may have created the fire as a trap for the first responders. In an afternoon press conference, Pickering said one of the firefighters was able to escape in his private vehicle, while the others remained pinned down for around an hour. Of those first responders, Webster’s Police chief says firefighters Mike Chiapperini and Tomasz Kaczowka were shot and died at the scene. Chiapperini was also a member of the Webster Police Department. Kaczowka was a member of the fire department and a 911 dispatcher. The other two firefighters that were shot are Theodore Scardino and Joseph Hofsetter. They were transported to Strong Memorial Hospital and are listed in guarded condition. Doctors at Strong Hospital said Scardino was shot twice, once in the shoulder and once in the knee. Hofsetter was shot in the pelvis. A fifth individual, off-duty Greece police officer John Ritter, was injured by shrapnel. Pickering says that the suspected shooter was found dead near the property where the fire began, and that there is no longer a threat to the area. No other details about the suspect have been released. We're told four homes were destroyed as a result of the fire. 33 neighbors in the immediate area were evacuated from their homes. Lake Road between the Irondequoit Outlet Bridge and Bay Road will remain closed until further notice. 13WHAM has several crews at the scene and elsewhere and will provide updates as they're available.
Posted by The RFBA at 3:35 PM 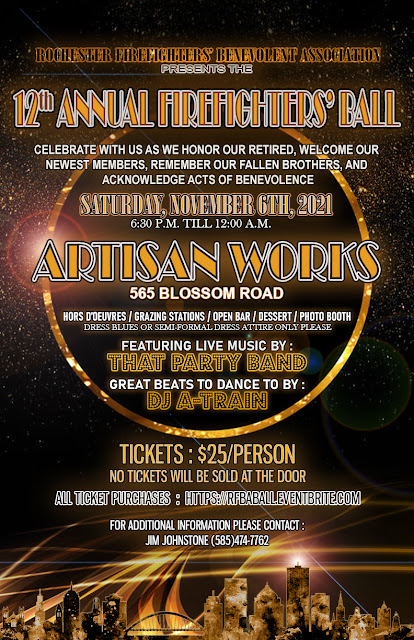